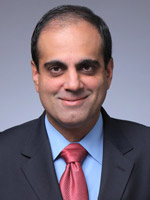 Dr. Samir Taneja is professor of urology and radiology at the Langone Medical Center at New York University in New York City.

Prostate Forum spoke with him recently about how MRI may alter prostate cancer biopsy.

PROSTATE FORUM: Most of my readers are familiar with the traditional trans-rectal ultrasound biopsy. But have prostate biopsy techniques evolved?

DR. TANEJA: The standard of care is still what we’ve done for many years: to do a random biopsy of the prostate where you take twelve samples dispersed in a systematic pattern: six from the right; six from the left; a space between the base mid- gland and apex; some in the middle part of the prostate; and some in the far lateral. That twelve- core biopsy advanced from the earlier standard in the 1990s, which was to do a six-core biopsy. We stopped doing six core biopsies toward the later 1990s, because we realized we missed a lot of cancers doing that. Some people have done more than twelve cores, but I think the typical biopsy in practice is doing ten to twelve cores.

The problem with that approach is that it is really a random sampling. We do a biopsy because the patient has a high PSA. We sample the prostate throughout in the hope that we’ll hit a cancer.

The prostate is the only organ that is biopsied in a non image-guided fashion. Typically an abnormal imaging finding prompts a biopsy of the breast, kidney, liver, etc. That biopsy is targeted toward the abnormal area, but that is not the case historically with prostate cancer.

The intrinsic problem of doing a random sampling is that you rely on sampling efficiency, and therefore are subject to sampling error. The result of sampling error as it translates in the prostate is that you: 1) either miss a cancer, or 2) you identify a small cancer that you think is low risk but, because of incorrect sampling, is high risk as you’ve missed the more aggressive components. You underestimate the risk of the cancer. Theoretically, you could over- estimate it as well. Finally, 3) you could find tiny cancers within the prostate that may have had nothing to do with the PSA elevation that prompted the biopsy, a phenomena we think that fuels the concept of over-detection and over-treatment.

Our goal with imaging has been to say that if you know where the most suspicious areas in the prostate gland are and you target those areas in biopsy that has a certain value. First, you’re far less likely to have false negative biopsies. Second, in theory you would be far less likely to identify tiny little cancers that have nothing to do with the PSA elevation, because those typically don’t show up well on MRI. Finally, if you have do see cancer, you can get a very good sample of it so that you can really counsel the patient on whether or not he needs treatment. This is an evolving standard. My team at NYU has published—and a number of other groups have published—on the idea of using image guidance in biopsy. Image-guided biopsy is now routine at NYU. A number of other academic centers routinely do it as well, but the reality is that it is certainly not community standard care. I would consider it to be among the more state-of-the-art techniques for biopsy for the reasons I outlined above. The final corollary advantage to image-guided biopsy is that it would allow you to localize the cancer’s location, focality, and extent of disease and therefore potentially decide who might benefit from focal therapy.